What is Term Life Insurance?

Term life insurance or term assurance is life insurance that provides coverage at a fixed rate of payments for a limited period of time, the relevant term. After that period expires, coverage at the previous rate of premiums is no longer guaranteed and the client must either forgo coverage or potentially obtain further coverage with different payments or conditions. If the life insured dies during the term, the death benefit will be paid to the beneficiary/nominee. Term insurance is typically the least expensive way to purchase a substantial death benefit on a coverage amount per premium rupee basis over a specific period of time.

Life insurance is a contract between an insurance policy holder and an insurer or assurer, where the insurer promises to pay a the insured’s nominee a sum of money in exchange for a premium, upon the death of the insured person. Depending on the contract, other events such as terminal illness or critical illness can also trigger payment. The policy holder typically pays a premium, either regularly or as one lump sum. Other expenses, such as funeral expenses, can also be included in the benefits.
Though one cannot exactly value a human life, an approximate sum could be determined based on the loss of income in future years, depending on the age of the insured, his occupation and his/her income. Hence, the Sum Assured ( or the amount guaranteed to be paid in the event of death of the insured) is by way of a ‘benefit’. Life Insurance products also pays the sum insured incase the policyholder becomes disabled on account of an accident.

Why is Life Insurance required?

What are the factors to be considered while purchasing a Life Insurance policy?


Ideally one should seek the help of an online distributor, insurance agent, banker or broker to understand your financial risks and decide on the right type of cover to mitigate the said risks (atleast financially). Some of the popular Life Insurance policies currently sold in the market include:

Some facts about the Life Insurance Industry in India...

India has amongst the lowest insurance penetrations across the world at 2.72% of GDP in 2016, significantly lower than the world average of 3.47%. Much smaller countries like Taiwan have a penetration of 16.65%. On important point of note is that among the BRIC nations, represented in the chart below, India is doing relatively better than Brazil and China. You will also note that India’s insurance penetration has marginally gone up to 2.76% in 2017, however the global data is not available. All data has been taken from the IRDAI Annual Report 2016-17.

Another parameter that gets generally compared across countries is the Insurance Density. Insurance density is measured or defined as ratio of premium (in US $) to total population of the country. Here India is again significantly worse off than almost all global countries and is more than 80% off the world average density. Again India has shown marginal improvement in 2017, but still has a long way to go.

The Life Insurance Industry in India has been growing steadily over the past years and the March 2018 GPW was $ USD 71.1 billion (almost 500,000 lac crores at today’s exchange). There are currently 24 active Life insurance players (1 Public sector insurer Life Insurance Corporation or LIC and 23 Private Players). 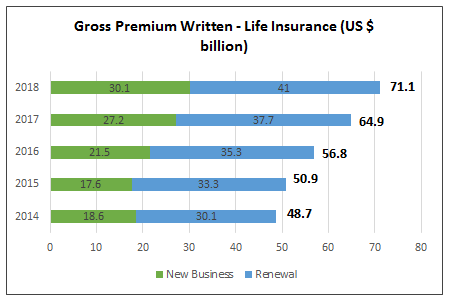 The Private Players have been growing more extensively and aggressively across all channels and hence now enjoy a 32% share (which was 2% 15 years ago). Similarly in terms of products also, the ULIP sensation has now quietened down and now Non Linked products have a significant and dominating 86% of all Life insurance policy sales.

Some Do’s and Dont’s (as prescribed by IRDAI)

Decreasing term insurance is a term life insurance plan that provides a death benefit that decreases at a predetermined rate over the life of the policy. Premiums remains constant while reductions in policy payout typically occur monthly or annually.
For example if your insurance cover Rs. 50 Lakhs for 20 years and suppose the cover decreases by 5% every year, then after 10 years your cover will be Rs.25 Lakhs.

Increasing Term Insurance is a term life insurance plan wherein the sum insured rises at a predetermined rate over the life of the policy. The premiums may or may not vary depending on the plan chosen
For example if your insurance cover is Rs. 50 lakhs for 20 years and suppose the cover increases by 5% every year, then after 10 years your cover will be Rs.75 Lakhs.

5 Year Level Term Insurance
The face amount of this 5 year term life policy remains level for the entire 5 year period and so does the premium. Upon death the face amount is paid either in one lump sum or in the form of an income.If you have a short term need for life insurance, like covering a bank loan, then this may be the plan for you.

10 Year Term Insurance
Like the 5 year term policy, the 10 year term life policy can be used to cover a bank loan, but it can do considerably more. It can be used for family protection and a myriad of other needs. The face amount of the policy remains level for the duration and so does the premium. Some companies allow you to continue the policy after 10 years with an increase in premium.

20 Year Term Insurance
The 20 year term insurance policy is probably the most popular of term life policies. The death benefit remains level for the duration and in some cases so does the premium. With some companies, however, the premiums increase after the first 10 years to reflect the cost of the additional risk to which the insurance company is exposed as the insured gets older. All in all, the 20 tear term life insurance policy is fairly inexpensive and does the job it is intended to do.