Compare India travel insurance quotes for Poland
Poland is a country in Central Europe The Capital of Poland is Warsaw, Poland remains a fascinating place for visitors with an inquiring mind.
Read more » 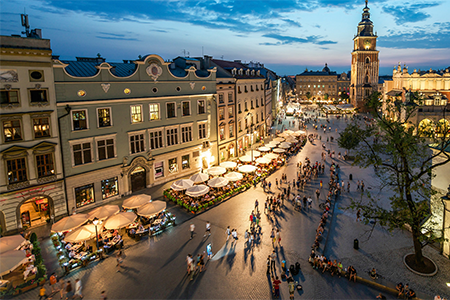 At EIndiaInsurance.com we have developed an easy to use 'Compare Indian travel insurance quotes' utility that simplifies the process by comparing insurance quotes as well as different benefit options. At one place, you can review policies of different companies, as well as purchase the policy that you like.  Customers can purchase using your credit/debit card and the policy will be emailed to the email ID in the application. A print out of this policy document can be provided to the Polish consulate along with the visa application.

Travel to Poland and other Schengen countries has been made simpler thanks to the Schengen Visa which allows non Euro and non-US citizens to travel the Maastricht treaty 26 Euro countries. Before the Schengen visa can be issued, applicants must however show proof of having adequate travel health insurance that will satisfy the requirements for the Schengen Visa.

While Poland does get to see a lot of International visitors especially from most European countries, India has not been one of the countries sending a large number of visitors to Poland. In the past year only around 8,300 Indians visited Poland and this number is likely to grow at a slow pace. Given the extremely cold climatic conditions, the Indians could probably looking at more temperate climates for their holidays.

Poland is a country located in Central Europe. It is divided into 16 administrative subdivisions, covering an area of 3.12 lac sq kms, and has a largely temperate seasonal climate. With a population of approximately 38.5 million people, Poland is the sixth most populous member state of the European Union. Poland's capital and largest metropolis is Warsaw. Other major cities include Kraków, Łódź, Wrocław, Poznań, Gdańsk, and Szczecin.

The official language is Polish and is spoken by almost the entire population.
Visa Requirements / Currency (please note these procedures / exchange rates can changed from time to time…please get an update from the embassy prior to travel)

As India is not part of the Schengen Area, if one is an Indian passport holder you will need to apply for the appropriate type of Schengen Polish Visa for travelling to the country. To be eligible for a Schengen Visa for Poland one will mainly need their current passport, along with certain documents, to be submitted with the Visa application form.

Things You Must Do in Poland

Polish cuisine is a style of cooking and food preparation originating in or widely popular in Poland. Polish cuisine has evolved over the centuries to become very eclectic due to Poland's history and it shares many similarities with other West Slavic countries like neighbouring Czech and Slovak. It has also been widely influenced by other Central European cuisines, namely German, Austrian and Hungarian as well as Jewish, French, Italian, and Turkish culinary traditions.

Since Poland is a country which is part of the Schengen countries in Europe, an Indian tourist while applying for Polish visa must show adequate travel medical insurance coverage for the entire duration of stay in Poland.

Travel insurance India for Poland is relatively cheaper when compared to destinations in Americas, and most insurance companies offer a specific Schengen Insurance Plan. One must ensure that the minimum Accident & Sickness (A&S) sum insured for a Schengen plan must be €30,000 (around $50,000), and a visa to visit any Schengen country will not be provided without this minimum coverage.

Illustration for 15 days Indian travel mediclaim insurance for Poland.
These premiums are across different plans and different benefits.. please log in to www.eindiainsurance.com to compare and buy the best travel health insurance for Indian tourists applying for Polish Visa.

The Wawel Castle is a castle residency located in central Kraków, Poland. Built at the behest of King Casimir III the Great, it consists of a number of structures situated around the Italian-styled main courtyard.

The Masurian Lake District or Masurian Lakeland is a lake district in northeastern Poland within the geographical region of Masuria, in the past inhabited by Masurians who spoke the Masurian dialect.

Białowieża Forest is one of the last and largest remaining parts of the immense primeval forest that once stretched across the European Plain. The forest is home to 800 European bison, Europe's heaviest land animal.

The Castle of the Teutonic Order in Malbork is a 13th-century Teutonic castle and fortress located near the town of Malbork, Poland. It is the largest castle in the world measured by land area and a UNESCO World Heritage Site.