Compare India travel insurance quotes for Portugal
Portugal, during its prime in the 15th and 16th centuries was a world power. It is located in Southwestern Europe, bordering the North Atlantic Ocean to the west of Spain.
Read more » 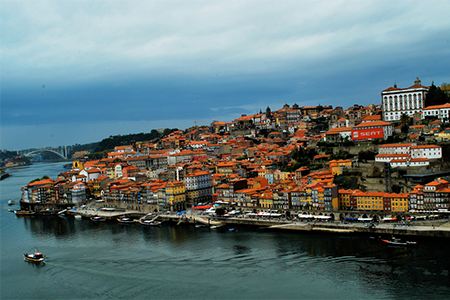 Portugal is home to great explorers Vasco da Gama, Magellan and Mr Football Cristiano Ronaldo…they have many international visitors from across the world and the Indian tourists have just started adding Portugal to their bucket list of countries…Last year around 9,500 Indians visited Portugal and this number is set to grow in the coming years.

Portugal is a country located mostly on the Iberian Peninsula in southwestern Europe. It is the westernmost sovereign state of mainland Europe, being bordered to the west and south by the Atlantic Ocean and to the north and east by Spain. Its territory also includes the Atlantic archipelagos of the Azores and Madeira, both autonomous regions with their own regional governments. With a land area of around 92,000 sq kms, it is home to 10.6 million people and has Lisbon as its capital city.

The official language is Portuguese and is spoken by almost the entire population. There are a few Portuguese speaking in Goa, Daman and Diu in India as well.
Visa Requirements / Currency (please note these procedures / exchange rates can changed from time to time…please get an update from the embassy prior to travel)

As India is not part of the Schengen Area, if one is an Indian passport holder you will need to apply for the appropriate type of Schengen Portuguese Visa for travelling to the country. To be eligible for a Schengen Visa for Portugal one will mainly need their current passport, along with certain documents, to be submitted with the Visa application form.

Things You Must Do in Portugal

Portuguese cuisine has many Mediterranean influences and is famous for seafood. The influence of Portugal's former colonial possessions is also notable, especially in the wide variety of spices used. These spices include piri piri and black pepper, as well as cinnamon, vanilla and saffron. Olive oil is one of the bases of Portuguese cuisine, which is used both for cooking and flavouring meals. Garlic is widely used, as are herbs, such as bay leaf and parsley.

Since Portugal is a country which is part of the Schengen countries in Europe, the Schengen consulate has made it mandatory for Indian travellers visiting Portugal to have good travel medical insurance satisfying the Schengen visa requirements.

India Travel insurance for Poland is relatively cheaper when compared to destinations in Americas, and most insurance companies offer a specific Schengen Insurance Plan. One must ensure that the minimum Accident & Sickness (A&S) sum insured for a Schengen plan must be €30,000 (around $50,000), and a visa to visit any Schengen country will not be provided without this minimum coverage.

Illustration for 15 days travel health insurance for Indians visiting Portugal.
These premiums are across different plans and different benefits.. please log in to www.eindiainsurance.com to compare and buy the best Schengen visa travel insurance for travelling to Portugal.

Belém Tower, or the "Tower of St Vincent", is a fortified tower located in the civil parish of Santa Maria de Belém in the municipality of Lisbon, Portugal.

The Pena Palace is a Romanticist castle in São Pedro de Penaferrim, in the municipality of Sintra, Portugal.

The Dom Luis I Bridge, or Luis I Bridge, is a double-deck metal arch bridge that spans the River Douro between the cities of Porto and Vila Nova de Gaia in Portugal.

The Palace of Sintra, also called Town Palace is located in the town of Sintra, in the Lisbon District of Portugal.