Compare India travel insurance quotes for Greece
Greece (Hellenic Republic) also called Ellas or Hellada or Elliniki Dimocratia is a country unique of beauty that has everything to offer to the visitor. Its capital is Athens, and it is a peninsular and mountainous country situated in southern Europe.
Read more » 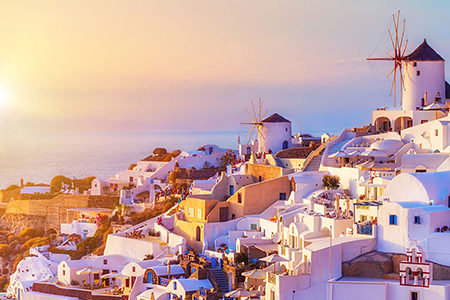 Understanding available Insurance options to travel to Europe can be complicated. There are many plans, various coverages, options and restrictions. Deciding on a policy that best suits your needs is not always easy.

We have created an comprehensive, easy to use Compare Indian travel insurance quotes that simplifies the process of identifying, and buying an appropriate policy.

Greece has started becoming one of the sought after destinations for the outbound Indian travellers…while the overall numbers are still not very high when compared to some other countries, the number of Indians visiting Greece doubled last year from the previous year to around 45,000 travellers. This is set to grow significantly in the years ahead.

Greece, officially the Hellenic Republic, also known as Hellas, is a country located in Southern and Southeast Europe, covering an area of around 1.32 lacs sq kms and with a population of approximately around 11 million. Athens is the nation's capital and largest city, followed by Thessaloniki.

The official language of Greece is Greek, spoken by 99% of the population. In addition, a number of non-official, minority languages and some Greek dialects are spoken as well. The most common foreign languages learned by Greeks are English, German, French and Italian.
Visa Requirements / Currency (please note these procedures / exchange rates can changed from time to time…please get an update from the embassy prior to travel)

As India is not part of the Schengen Area, if one is an Indian passport holder you will need to apply for the appropriate type of Schengen Greek Visa for travelling to the country. To be eligible for a Schengen Visa for Greece one will mainly need their current passport, along with certain documents, to be submitted with the Visa application form.

Things You Must Do in Greece

Since Greece is a country which is part of the Schengen countries in Europe, the traveller needs to purchase Schengen visa travel health insurance to satisfy the consular requirements.

Travel insurance India for Greece is relatively cheaper when compared to destinations in Americas, and most insurance companies offer a specific Schengen Insurance Plan. One must ensure that the minimum Accident & Sickness (A&S) sum insured for a Schengen plan must be €30,000 (around $50,000), and a visa to visit any Schengen country will not be provided without this minimum coverage.

Illustration for 15 days travel health insurance to Greece.
These premiums are across different plans and different benefits.. please log in to www.eindiainsurance.com to compare and buy Indian travel insurance for visiting Greece.

Santorini is a volcanic island in the Cyclades group of the Greek islands. It is famous for its dramatic views, stunning sunsets, the white-washed houses, and its very own active volcano.

Mykonos is an island in the Cyclades group in the Aegean Sea. It's popularly known for its summer party atmosphere. Beaches such as Paradise and Super Paradise have bars that blare thumping music.

The Ancient Theatre of Delphi, Greece: The ancient theatre in the archaeological site of Delphi Greece has been built on the same hill as the Temple of Apollo, but it is located further above it.

Lindos is a town on the Greek island of Rhodes. It’s known for its clifftop acropolis, which features monumental 4th-century gates and reliefs from about 280 B.C. The Temple of Athena Lindia sits above an earlier temple.