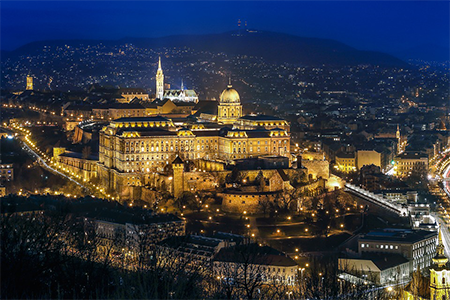 Eastern Europe destinations have been growing at around 25-30% year on year according to the travel estimates of the Indian travel industry. Hungary is no exception and nearly 20,000 Indians travelled there in 2018 and this number is set to grow this year.

Hungary is a country in Central Europe. Spanning an area of 93,030 sq kms in the Carpathian Basin, it borders Slovakia to the north, Ukraine to the northeast, Austria to the northwest, Romania to the east, Serbia to the south, Croatia to the southwest, and Slovenia to the west. With about 10 million inhabitants, Hungary is a medium-sized member state of the European Union. Hungary's capital and largest city is Budapest; other major urban areas include Debrecen, Szeged, Miskolc, Pécs and Győr..

The official language is Hungarian, which is the most widely spoken Uralic language in the world, and among the few non-Indo-European languages to be widely spoken in Europe.
Visa Requirements / Currency (please note these procedures / exchange rates can changed from time to time…please get an update from the embassy prior to travel)

As India is not part of the Schengen Area, if one is an Indian passport holder you will need to apply for the appropriate type of Schengen Hungarian Visa for travelling to the country. To be eligible for a Schengen Visa for Hungary one will mainly need their current passport, along with certain documents, to be submitted with the Visa application form.

Things You Must Do in Hungary

Hungarian or Magyar cuisine is the cuisine characteristic of the nation of Hungary and its primary ethnic group, the Magyars. Traditional Hungarian dishes are primarily based on meats, seasonal vegetables, fruits, fresh bread, dairy products and cheeses..

Some of the Hungarian dishes one must try include:
Overseas Travel Medical Insurance Hungary

Since Hungary is a country which is part of the Schengen countries in Europe, the traveller needs to purchase best travel medical insurance for Hungary.

Indian Travel health insurance for Hungarian visa is relatively cheaper when compared to destinations in Americas, and most insurance companies offer a specific Schengen Insurance Plan. One must ensure that the minimum Accident & Sickness (A&S) sum insured for a Schengen plan must be €30,000 (around $50,000), and a visa to visit any Schengen country will not be provided without this minimum coverage.

Illustration for 15 days Schengen visa travel insurance for Indians to Hungary.
These premiums are across different plans and different benefits.. please log in to www.eindiainsurance.com to compare and buy the most appropriate travel health insurance Indian travellers to Hungary.

The beautiful Danube River flows through Hungary from north to south, and as it passes through Budapest, it splits the city in two. One of the best sunset views of the river and of both Buda and Pest is from the Freedom Bridge, a favorite spot for locals.

Buda Castle is the historical castle and palace complex of the Hungarian kings in Budapest. It was first completed in 1265, but the massive Baroque palace today occupying most of the site was built between 1749 and 1769.

St. Stephen's Basilica is a Roman Catholic basilica in Budapest, Hungary. It is named in honour of Stephen, the first King of Hungary, whose supposed right hand is housed in the reliquary.

The Széchenyi Chain Bridge is a suspension bridge that spans the River Danube between Buda and Pest, the western and eastern sides of Budapest, the capital of Hungary.It was regarded as one of the modern world's engineering wonders.