Compare India travel insurance quotes for Malta
Malta is a Southern European country The Capital of Malta is Valletta. The minicity of Valletta, with ornate palaces and museums, protected by massive fortifications of honey color stone
Read more » 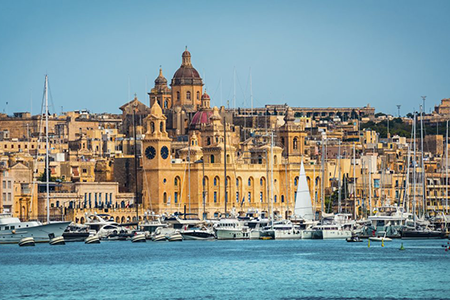 Malta has started seeing Indian outbound travellers arriving at its shores over the past few years. Last year as many as 2,700 Indians visited Malta and this number is set to grow in the coming years.

Malta is a Southern European island country consisting of an archipelago in the Mediterranean Sea. It lies south of Italy, east of Tunisia, and north of Libya. With a population of about 475,000 over an area of 316 sq km, Malta is the world's tenth smallest and fifth most densely populated country. Its capital is Valletta, which is the smallest national capital in the European Union.

The official languages are Maltese and English, with Maltese officially recognised as the national language and the only Semitic language in the European Union.
Visa Requirements / Currency (please note these procedures / exchange rates can changed from time to time…please get an update from the embassy prior to travel)

As India is not part of the Schengen Area, if one is an Indian passport holder you will need to apply for the appropriate type of Schengen Malta Visa for travelling to the country. To be eligible for a Schengen Visa for Malta one will mainly need their current passport, along with certain documents, to be submitted with the Visa application form.

Things You Must Do in Malta

Maltese cuisine reflects Maltese history, it shows strong Sicilian and English influences as well as Spanish, French, Maghrebin, Provençal, and other Mediterranean cuisines. Having to import most of its foodstuffs, being positioned along important trade routes, and having to cater for the resident foreign powers who ruled the islands, opened Maltese cuisine to outside influences.

Some of the Maltese dishes which are very popular include:
Overseas Travel Medical Insurance Malta

Since Malta is a country which is part of the Schengen countries in Europe, the consulate has made it mandatory for Indians applying for Schengen Visa to show proof of adequate medical insurance coverage for their entire duration of stay in Malta.

Travel health insurance for Indians visiting Malta is relatively cheaper when compared to destinations in Americas, and most insurance companies offer a specific Schengen Insurance Plan. One must ensure that the minimum Accident & Sickness (A&S) sum insured for a Schengen plan must be €30,000 (around $50,000), and a visa to visit any Schengen country will not be provided without this minimum coverage.

Illustration for 15 days travel insurance for Indian tourists to Malta.
These premiums are across different plans and different benefits.. please log in to www.eindiainsurance.com to compare and buy the most popular Schengen Visa travel medical insurance for travelling to Malta.

A strategically important seaport, this fortified city is the elegant capital of the Republic of Malta. The entire city of Valletta is testimony to the grandeur of the Knights of Malta, the European noblemen who were granted the Maltese Islands by the King of Spain in 1530.

Situated in Malta’s capital city of Valletta, the St. John’s Co-Cathedral is recognized as an outstanding example of Baroque architecture. Its exterior is forbidding and deceptive, as it closely resembles a fort.

Mdina offers an escape to an enchanting fairy-tale city. This captivating medieval hilltop town is steeped in history. Tourists must pass through the dramatic Main Gate to enter the city, giving the impression of walking back in time.

This picturesque fishing village is just a 30 minute bus ride from Valletta. Taking the bus is perhaps the best way to get there, particularly since it’s notoriously difficult to park in Marsaxlokk, especially near the waterfront.