Compare India travel insurance quotes for Spain
Spain is Europe's fourth largest country after Russia, Ukraine and France. is separated from Morocco by the Straits of Gibraltar and has both a Mediterranean and Atlantic Coastline.
Read more » 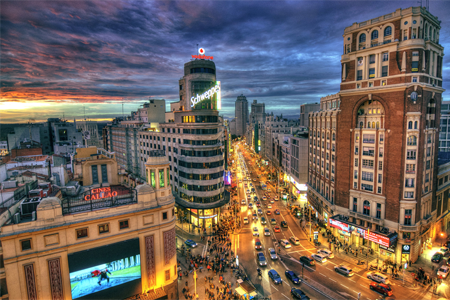 Spain is one of the European destinations that have been growing in terms of the Indian outbound travellers visiting. The number of Indian travellers visiting Spain has been growing rapidly over the past years and last year as many as 61,500 Indians visited Spain, most of them being tourists. This number is set to cross 1 lac in the next couple of years.

Spain is a country mostly located in Europe. Its continental European territory is situated on the Iberian Peninsula. Its territory also includes two archipelagoes: the Canary Islands off the coast of Africa, and the Balearic Islands in the Mediterranean Sea. Several small islands in the Alboran Sea are also part of Spanish territory. The country's mainland is bordered to the south and east by the Mediterranean Sea except for a small land boundary with Gibraltar; to the north and northeast by France, Andorra, and the Bay of Biscay; and to the west and northwest by Portugal and the Atlantic Ocean covering a total land area of 5.06 lac sq kms and a population of around 47 million with Madrid as its Capital.

The official language is Spanish, It is a global language and the world's second-most spoken native language, after Mandarin Chinese.
Visa Requirements / Currency (please note these procedures / exchange rates can changed from time to time…please get an update from the embassy prior to travel)

As India is not part of the Schengen Area, if one is an Indian passport holder you will need to apply for the appropriate type of Schengen Spanish Visa for travelling to the country. To be eligible for a Schengen Visa for Spain one will mainly need their current passport, along with certain documents, to be submitted with the Visa application form.

Things You Must Do in Spain

Geography and climate had great influence on Spanish cuisine and its cooking methods and available ingredients. Spanish cuisine derives from a complex history where invasions and conquests of Spain have modified traditions which made new ingredients available. Thus, the current and old cuisine of Spain incorporates old and new traditions.

Since Spain is a country which is part of the Schengen countries in Europe, the traveller needs to purchase the appropriate Indian travel health insurance for applying for Spanish visa.

Travel medical insurance India for Spain is relatively cheaper when compared to destinations in Americas, and most insurance companies offer a specific Schengen Insurance Plan. One must ensure that the minimum Accident & Sickness (A&S) sum insured for a Schengen plan must be €30,000 (around $50,000), and a visa to visit any Schengen country will not be provided without this minimum coverage.

Illustration for 15 days Indian tourist insurance for travel Spain.
These premiums are across different plans and different benefits.. please log in to www.eindiainsurance.com to compare and buy the best Indian visitor medical insurance for Spain.

Barcelona, the cosmopolitan capital of Spain’s Catalonia region, is known for its art and architecture. The fantastical Sagrada Família church and other modernist landmarks designed by Antoni Gaudí dot the city.

Madrid, Spain's central capital, is a city of elegant boulevards and expansive, manicured parks such as the Buen Retiro. It’s renowned for its rich repositories of European art, including the Prado Museum’s works by Goya.

Granada is a city in southern Spain’s Andalusia region, in the foothills of the Sierra Nevada mountains. It's known for grand examples of medieval architecture dating to the Moorish occupation, especially the Alhambra.

Seville is the capital of southern Spain’s Andalusia region. It's famous for flamenco dancing, particularly in its Triana neighborhood. Major landmarks include the ornate Alcázar castle complex, built during the Moorish Almohad dynasty, Granada.